What’s Up World?
Between the cracks of the world’s news headlines 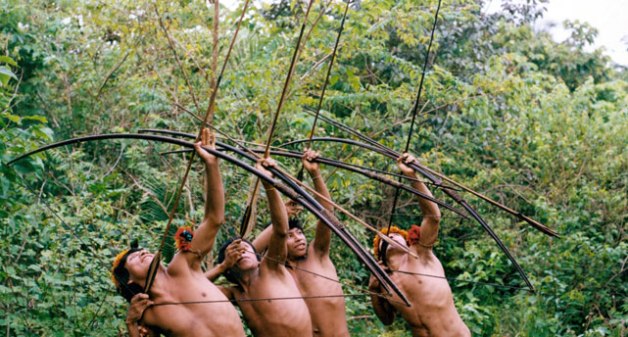 The earth’s most endangered tribe, the Awá, are on the brink of extinction due to the illegal deforestation of their territory in the eastern Amazon.

With only 355 tribe members thought to be remaining, the Awá are one of only two hunter-gatherer tribes left in the Brazilian Amazon. Not only are armed, illegal loggers invading their territory to exploit it for valuable timber, but entire families are being killed, as ‘pistoleros’ (hired gunmen) hunt Awá who stand in the way of land grabbers.

But in the past few weeks, according to reports, the Brazilian army has moved in around the Awá’s territory, deploying tanks, helicopters and a hundreds other vehicles, closing timber mills and confiscating loggers’ machinery.

The plight of the Awá has drawn international attention since the commencement of a grass roots campaign by tribal rights group Survival International last year. To add your voice, take a look here.

Ummm, Asha Haji Elmi is my new hero. There’s a good chance she’ll be yours too after watching this.

A special news report, Sisters of Somalia, is shining a light on the work Asha, her sister Amina and her organization Saving Somali Women and Children (SSWC) is doing to bring dignity to the women and girls living in Mogadishu’s refugee camps.

After years of unrelenting conflict, drought and famine, Somalia has been devastated beyond belief, and some 500,000 people are still living in refugee camps in pretty dire conditions.But no matter how big the problem may seem, Asha and the SSWC show an unrelenting hope, as they work to restore dignity to the vulnerable women and children they meet in the camps.

Definitely upsetting but absolutely worth a watch.

Ah, the joys of technology. As inventors and creatives put their minds together for the common good, new and emerging inventions are making playtime safer around the world.

A new, crowd-funded laser bike light called Blaze could help save the lives of cyclists on busy London roads. Created by young inventor Emily Brooke, Blaze projects a glowing green image of a cyclist ahead of riders, giving buses, cars, trucks and other predators an early heads up that a two-wheeled bandit is approaching.

Meanwhile in Western Australia, technology is deterring another kind of predator, as scientists and inventors unveil the ‘invisibility wetsuit’, designed to camouflage surfers in the ocean and warn off sharks.

Little Sun, the invention of artist Olafur Eliasson and engineer Frederik Ottesen, is a global project to bring safe, affordable light to the 1.6 billion people worldwide who have no access to the electrical grid. Working in a similar way to the TOMS shoes model, buying one of the hand-sized, sun-shaped, solar-powered lamps allows one to be sold off-grid at a locally affordable price. You can buy your very own Little Sun here.

Something brewing in your part of the world? We want to know about it. Tweet @its_alicia or @mtvvoices using the hashtag #WhatsUpWorld