What’s Up World?
Between the cracks of the world’s news headlines

When protests get fiery

For most of us, our understanding of self-immolation is limited to the front cover of Rage Against the Machine’s debut album. But in Nepal it’s becoming way too common.

Self-immolation – ie the act of lighting yourself on fire – has been used in the region for some time as a form of protest against Chinese rule over the region of Tibet, homeland of the exiled Dalai Lama.

Last week a 21 year old man became the 101st protester to die since 2009 after setting himself alight, and the practice is becoming increasingly common amongst teenagers.

While Chinese authorities attempt to crack down on self-immolation, the frequency of the protests is dramatically accelerating.

How would you feel about connecting your Twitter account with your credit card and going shopping using hashtags?

Well, that’s what American Express think we should do. Last week they unveiled the next step in their social commerce service: Amex Sync. Tweeps can buy products like the Amazon Kindle Fire HD, Xbox 360, Sony Action Cam and a DKNY bracelet and have them home delivered across America, all using hashtags.

I’d just like to point out that, thanks to the rise of online shopping, young people in the USA carry more debt than previous generations, pay it off slower and are predicted to die still owing money to banks and credit card companies, according to new research.

What do you think? Convenient and fun or a great way for banks to market debt to young people? 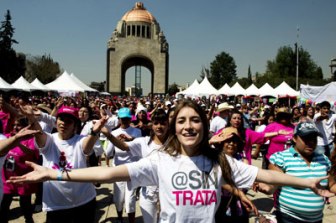 In case you missed it, last Thursday hundreds of thousands of women (and gentlemen) in 190 countries all over the world took part in One Billion Rising, a global movementcalling for an end to violence against women.

Sisters as far and wide as India, Australia, the Philippines, Italy, Afghanistan, the USA, the Democratic Republic of Congo, in schools, in prisons, and in parliaments shook their booties in solidarity with the 1 billion women – that’s an astounding 1 in 3 women – who have been raped or beaten around the world.

V Day (who have thankfully hijacked Valentine’s Day) has been raising awareness of violence against women for the past 15 years. Founded by Eve Ensler, author of The Vagina Monologues, this year they took their revolution to a whole new level. You can follow them on Facebook to see what happens next…

How to become a REAL Hollywood hero 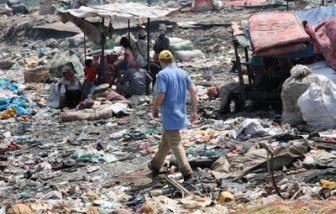 This is the inspiring riches to rags story of Scott Neeson.

In the late 90′s Scott was a high-flying Hollywood exec, overseeing hundred million dollar budgets for blockbusters like Titanic and Braveheart. A high school dropout from Adelaide, Australia, Scott was seemingly ‘living the dream,’ but a life of private jets, model girlfriends and having film stars for next door neighbours wasn’t all it’d promised to be.

Everything changed in 2003 during a trip to Cambodia. Scott was confronted with some of the world’s worst poverty in Steung Meanchey, where he discovered hundreds of street kids living and working on a garbage dump. Scott went back to LA, sold his bachelor pad and all of his possessions and used the money to start a fund for an orphanage and a school to get the kids out of the slums.

Ten years on, Scott spends his time encouraging other Hollywood high-fliers to donate towards his foundation, Cambodian Children’s Fund, and its ever-expanding network, which now includes a medical clinic, food distribution and a small business loans scheme.

If you have a spare 30 minutes I highly recommend this special report about Scott’s journey. You can keep up to date with CCF’s amazing work on Facebook.

Something brewing in your part of the world? We want to know about it. Tweet @its_alicia or @mtvvoices using the hashtag #WhatsUpWorld